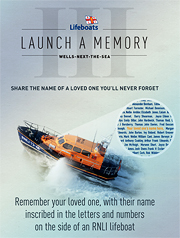 The sands to the west of the harbour entrance now quickly get cut off by the incoming tide. Download our 2022 updated local map and guide for enjoying the coast and beaches at Wells and Holkham... see our Sea Safety Page

The RNLI Lifeboat Station in Wells-next-the-Sea houses an all-weather lifeboat and an inshore lifeboat to save lives and assist with emergencies around Wells and off the North Norfolk coast. Manned by volunteer crews, the boats are ready to launch within minutes, 24 hours a day, every day of the year. This website will tell you more about the station and give you a taste of what we do and the traditions of the lifeboat service. 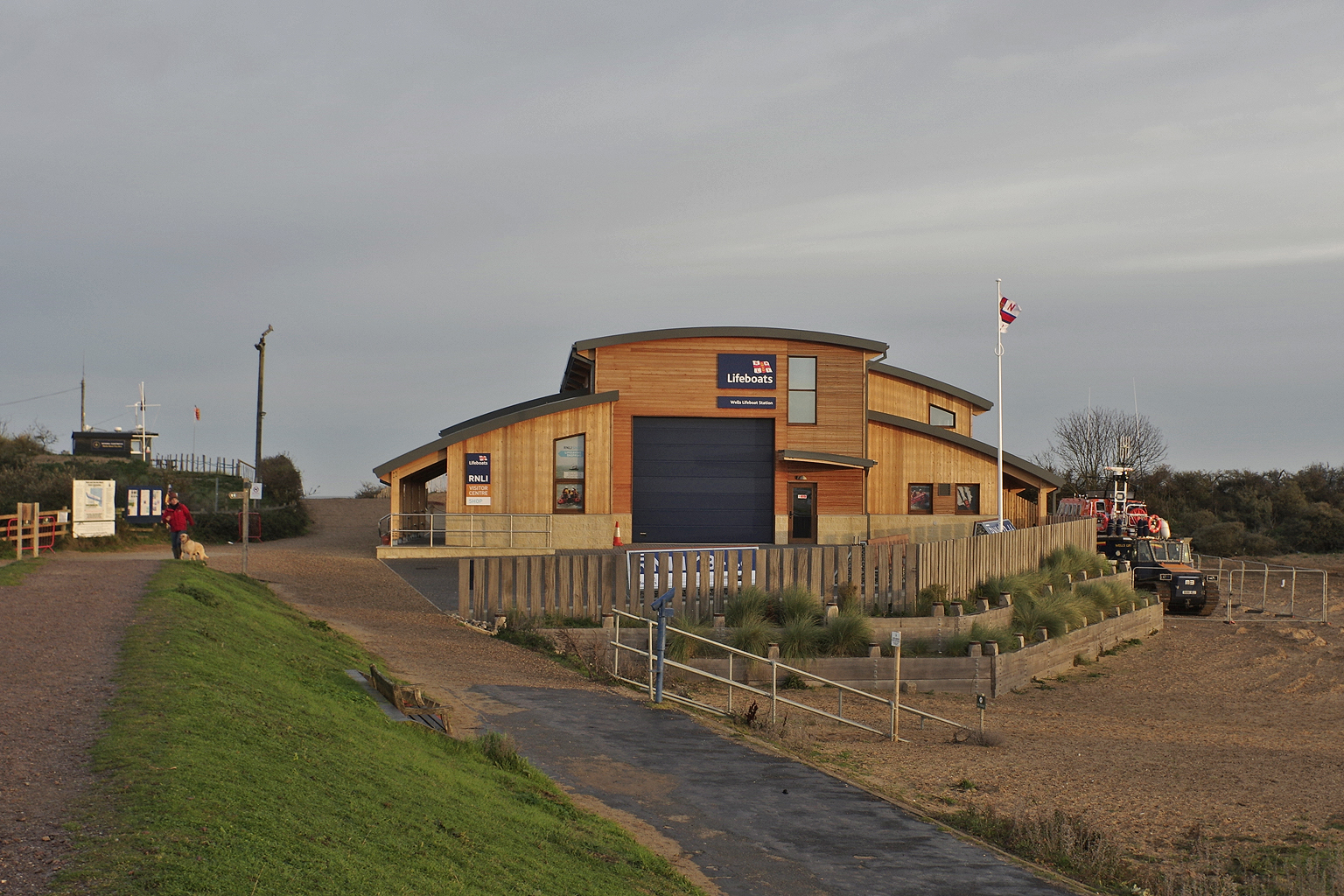 Our new boathouse is complete! See the boathouse build pages for the latest information and the story of how we got there!

Our new shop, visitor information centre and public viewing gallery are now open most weekends from 10-4.

Starting in January, our volunteer guides will be showing people around the lifeboat station. The tours must be booked in advance using the link below. For more information, see our page on Visiting Wells lifeboat station

Humber coastguard paged Wells inshore lifeboat to assist two persons and a dog reported cut off by the incoming tide opposite the beach huts at Wells. The ILB launched from the new boathouse at 15:15 and located the casualties stranded on a sandbar to the west of the harbour entrance at 15:20. They were completely cut off with very little sand still exposed. The two persons and their dog were taken on-board the ILB and returned to the safety of the beach by the lifeboat house. At 15:30, the lifeboat was recovered, rehoused refuelled and ready for service again by 15:58.

Wells inshore lifeboat was paged to assist an injured woman who had fallen while walking out on the marshes at Burnham Overy Staithe and was now cut off by the incoming tide. The ILB launched from the new lifeboat station (for the first time) and headed to Burnham Overy where the casualty was quickly locaated. Although in pain, the woman, assisted by her husband, was able to walk to the lifeboat which took them ashore at Burham Overy Staithe where the local coastguard team were waiting to take care of them. The lifeboat left the scene at 16:06 and the boat was recovered, washed down and rehoused by 16:41.

Wells Lifeboat was paged to assist a person being violently seasick on a fishing charter boat about 11 miles NNE of Wells harbour. The all-weather lifeboat left the lifeboat house at 12:34 to launch at the low water launch site on Holkham beach but was stood down before launching at 12:42 as a helicopter had been sent to the incident.

Humber Coastguard requested the ILB launch to a windsurfer in difficulty in the sea opposite the lifeboat house. As the crew prepared to launch, however, it was apparent that the windsurfer had been able to swim in towards the beach. Two of the ILB crew in their drysuits waded out to help the windsurfer ashore while a member of the public helped by bringing the board and sail ashore. The windsurfer was well and needed no further assistance.

Wells Inshore Lifeboat was paged to assist two persons on a paddleboard who were reported being swept out to sea between Wells and Scolt Head Island. The ILB launched with a crew of 3 from Holkham beach near low water at 17:28 and proceeded toward the first informant on the beach. In the meantime, a third person had entered the water to swim out to the two persons on the paddleboard and assist them back to the shore. The ILB arrived on scene at 17:35 to find that all three had managed to get safely ashore. They were subsequently met by the local Coastguard team who had also been paged. The ILB was stood down at 17:40 and returned to the low water recovery site. It arrived back at station at 18:08 and was rehoused and was ready again for service at 18:30 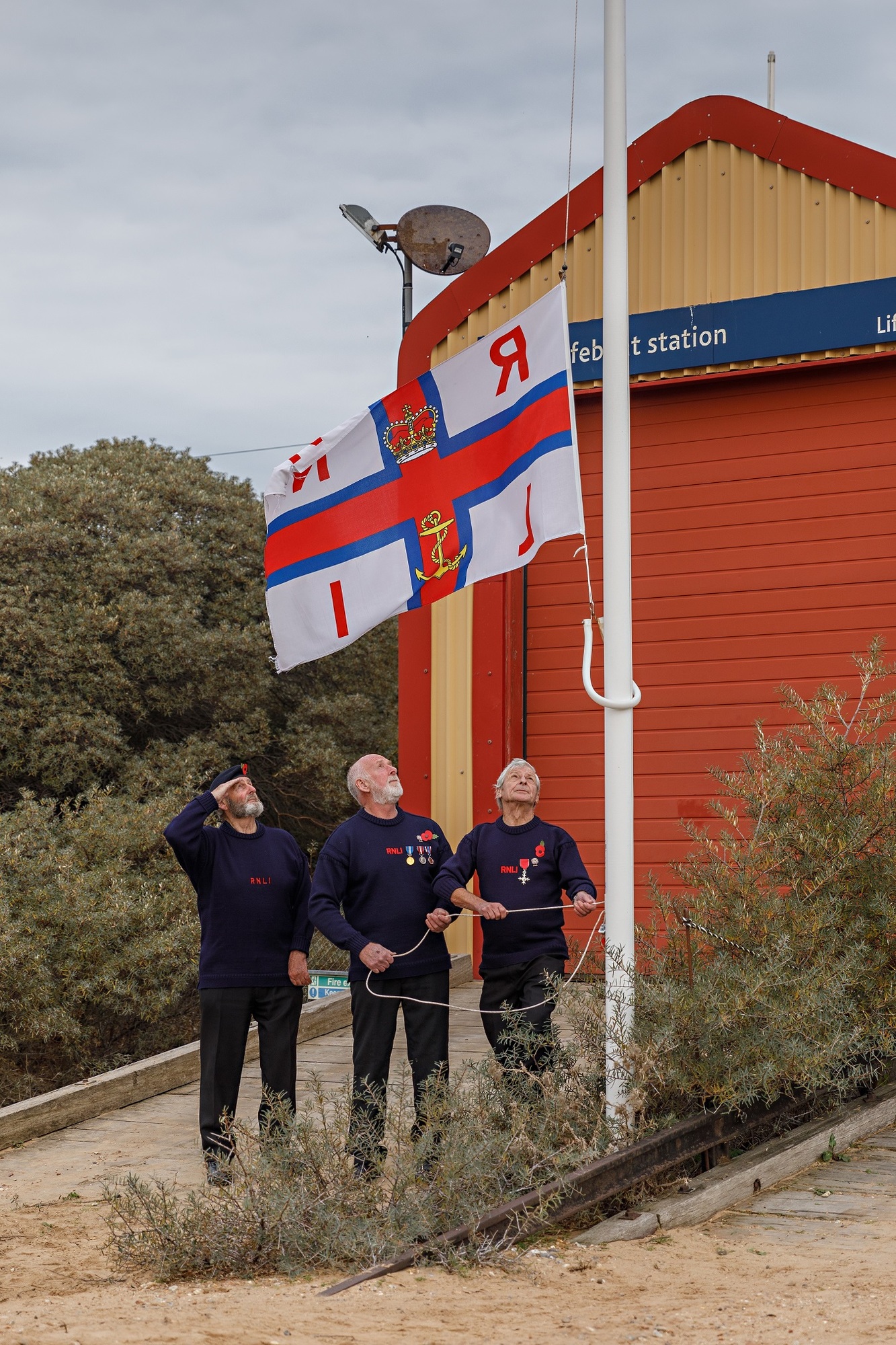 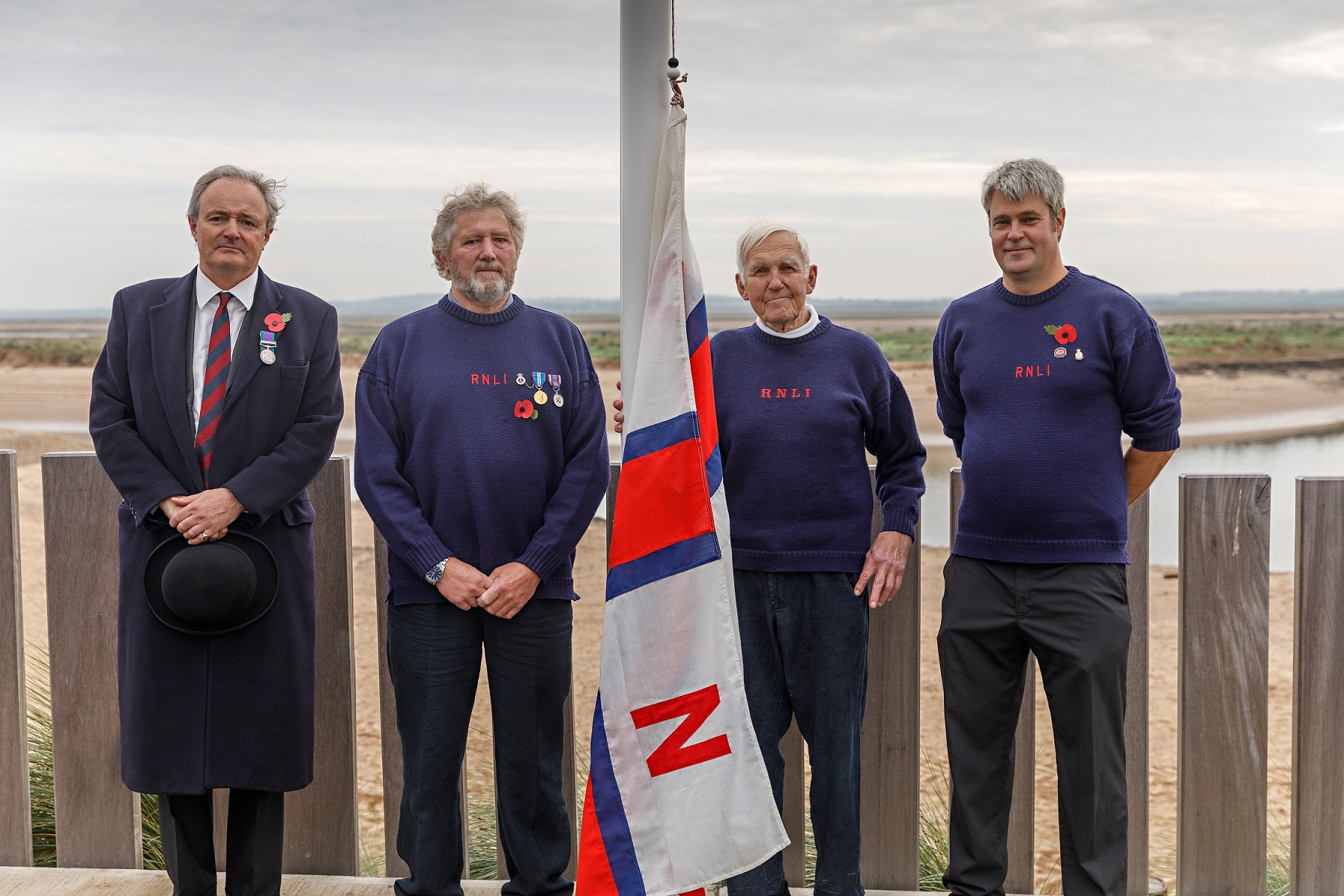 The Earl of Leicester, Peter Rainsford, Richard Cracknell and Martin Emerson prepare to raise the flag on the new boathouse
CT 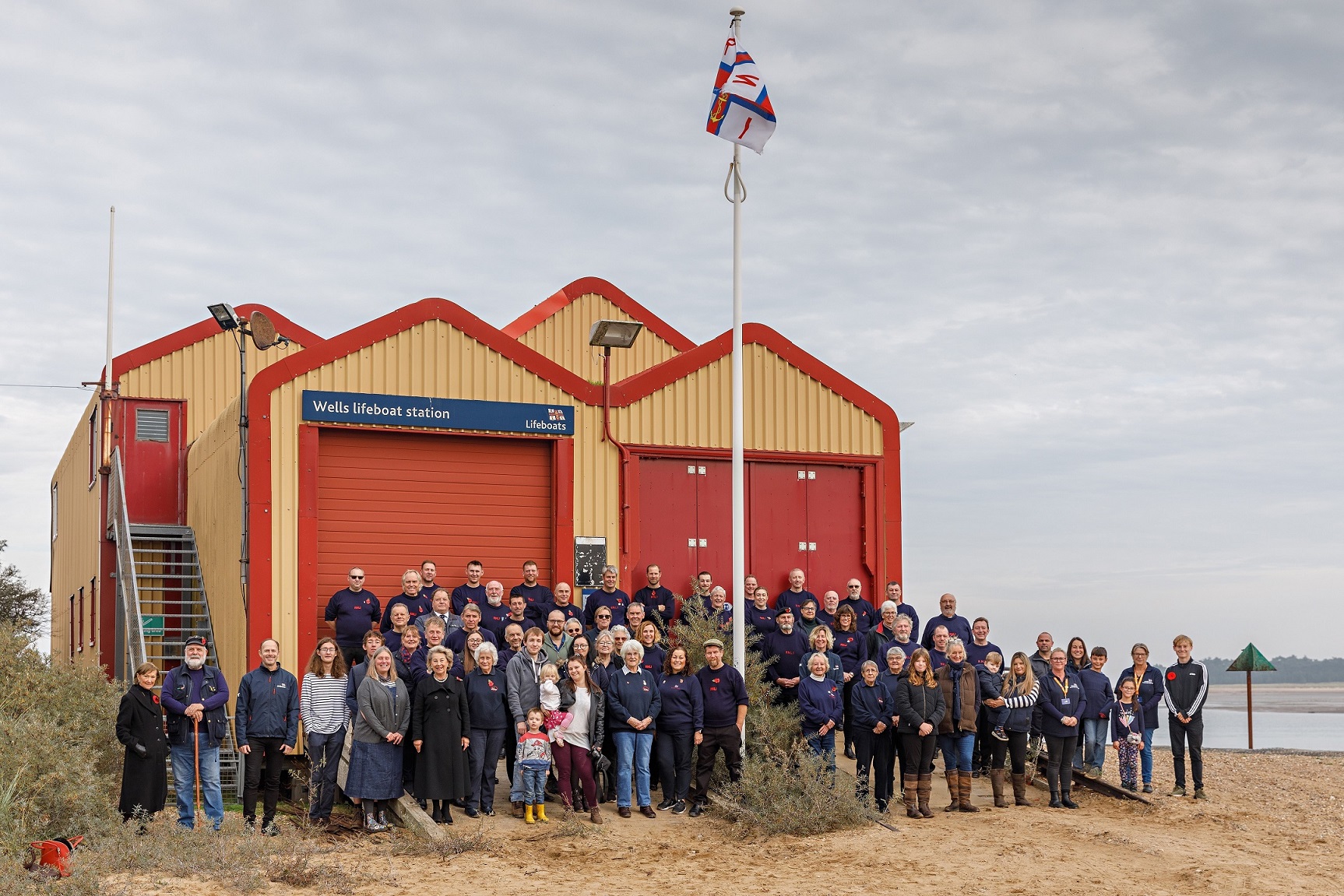 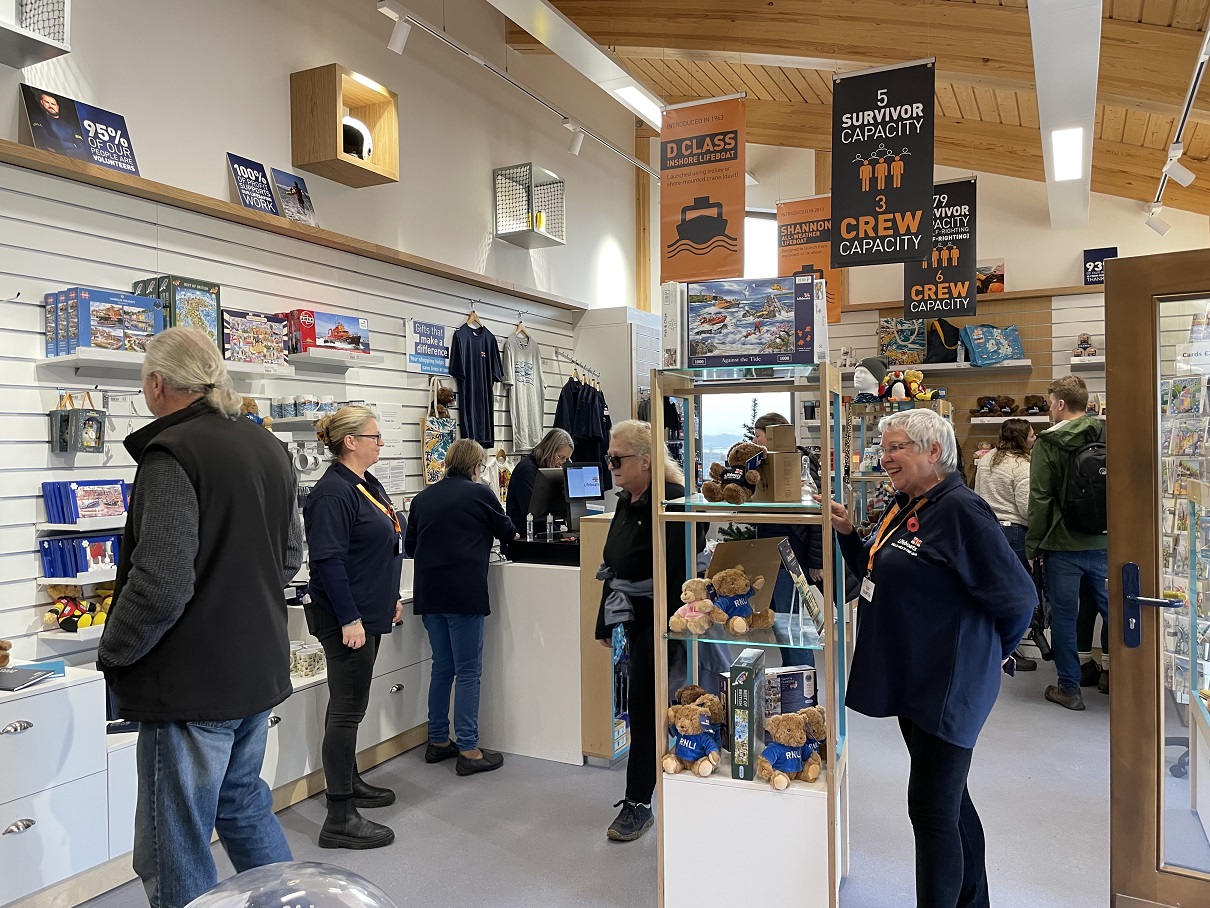 Wells RNLI officially moved into the new boathouse on 13 November with a flag ceremony to mark the transfer of operations as well as the opening of the RNLI shop and visitor information centre in the new building.

Respected former members of the crew, aided by senior current members and the Earl of Leicester, lowered and raised the flag with pride, knowing that although it was the end of an era for the old lifeboat station, it was the beginning of a new and exciting time ahead for the new.

Chris Hardy, Lifeboat Operations Manager, said "All of our Lifeboat crew were thrilled to finally transfer to our new purpose-built boathouse, which has been designed specifically to to accommodate and maintain our new Shannon and D-class inshore lifeboat. The new boathouse also provides vastly improved crew changing facilities, a large and well-equipped crew room, which will double up as an excellent crew training facility."

The Mersey class lifeboat left the old boathouse for the last time to be photographed with crew and families alongside the Shannon and inshore boats. It remains the station boat and will now operate from the beach by the new boathouse, continuing for some weeks yet to play that vitally important role of being 'ever ready' to save life at sea off our coastline.

The new Shannon will become fully operational once the volunteer crew have completed their training in operating the boat and its SLRS launch and recovery system. Early next year the Mersey will be retired and we, and members of the public, will have an opportunity to say a fond and fitting farewell before she leaves Wells for the last time after serving us so well for 32 years.

Starting in January, guided tours of the lifeboat station can be booked from this website. The tours will be for groups of up to twelve people and will last just under an hour giving people an opportunity to see the Duke of Edinburgh close up and discover more about the workings of the station.

We are again indebted to local photographer (and Sheringham lifeboat crew member) Chris Taylor for taking photos and making this video of the day, showing our Mersey leaving the old boathouse for the last time, boats, crew and families gathered on the beach and the flag ceremony. Prints of Chris' photos can be ordered here

More photographs of the day...

Starting next January, our volunteer guides will be showing people around the lifeboat station. The tours must be booked in advance using the link below. For more information, see our page on Visiting Wells lifeboat station

We've moved in... Wells RNLI is now operating from the new building. See the boathouse build pages for the latest information and the story of how the new station was built.

The new Shannon lifeboat was funded in part with a station appeal for £250,000 in 2014-15 and also by the Civil Service charity The Lifeboat Fund with its 150th Anniversary Appeal. We are hugely grateful to everyone who has donated, fund-raised, helped and supported us both locally and across the UK and further afield.

We're keen to protect our crew to ensure the lifeboats can be manned when needed. Please don't visit the station or shop if you or someone you have recently been in close contact with has Covid symptoms or a postive test.

Our crew will be training with our new Shannon 13-46 in the coming weeks. You are welcome to come and see the lifeboat launch from a safe distance on the beach bank or beach; please keep clear of the lifeboat and SLRS and keep children and dogs under supervision. Exercises and training will be ad-hoc but we will try to post dates in advance when we can. All dates are subject to change for operational reasons.

The Royal National Lifeboat Institution (RNLI) is a charity, registered in England and Wales (209603) and Scotland (SC037736). This website is managed and maintained by local volunteers at Wells-next-the-Sea Lifeboat Station and is not the main RNLI site. All text and images copyright (C)2005-2021 RNLI Wells Lifeboat Station, or as indicated, and may not be downloaded, copied or reproduced elsewhere without prior permission of the station or the relevant copyright holder. Site Manager